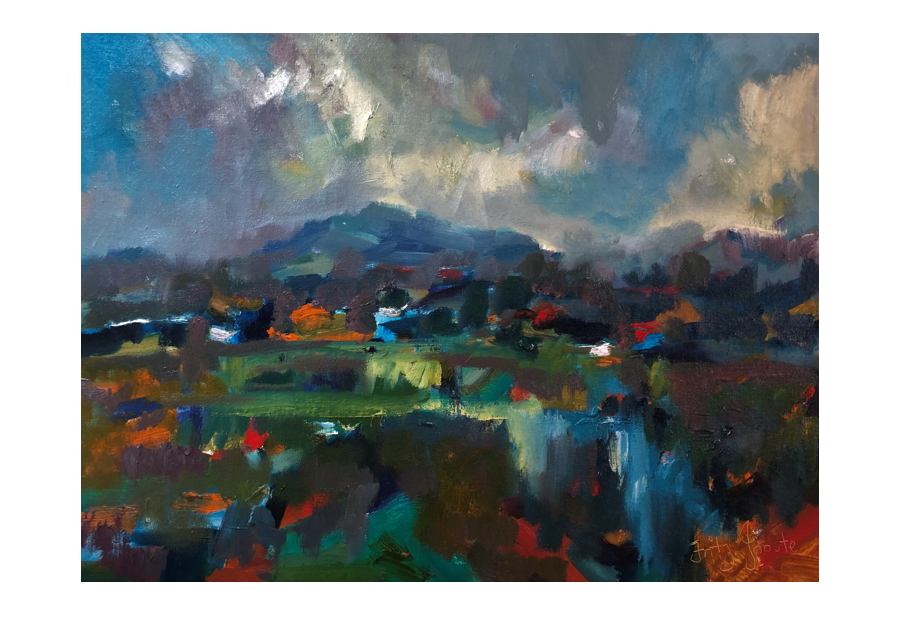 I am somewhat ashamed to admit that I made it an unknown distance into the second half of my life before I read Shakespeare’s King Lear from end to end, pencil in hand. Lear is one of the plays featured in Lionel Trilling’s monumental book The Experience of Literature.

Trilling’s commentary at the end of the play is wonderful. King Lear is not a happy story. Trilling starts his commentary as follows:

Of the supreme achievements of the creative mind with which King Lear is usually compared, it is perhaps the only one that seems to issue in hopelessness…The concluding scene speaks less of peace, let alone of hope, than of an ultimate weariness.

Lionel Trilling – The Experience of Literature

Quoting Iris Murdoch who said: “Only the very greatest art invigorates without consoling”, Trilling concludes his commentary on King Lear:

If we ask how, in the face of its dire report of life, this play can be said to invigorate, the answer is that it does us the honor of supposing that we will make every possible effort of mind to withstand the force of its despair and to understand the complexity of what it tells us about the nature of human existence: it draws us into more activity than we had thought ourselves capable of.

Lionel Trilling – The Experience of Literature.

I have also been making my way, assisted by my coffee in the morning, through William Barrett’s brilliant book The Illusion of Technique. Anyone living under the illusion that technology alone will save the human world would be well advised to study this fundamental investigation of the limits of technique and logic in a world in which God is believed to be dead.

In a chapter on Heidegger’s commentary on the poems of Hölderlin, Barrett writes about the tragic life of Hölderlin – a man who went insane at age 32, spending the last 36 years of his life as an “amiable and harmless lunatic being cared for in the household of a local carpenter and doing odd jobs as a gardener”.

Barrett’s writing on Hölderlin is beautiful:

As the shadow darkens over the poet, the poems themselves become more daring, disconnected, schizoid – more “modernist” in manner… The great hymns are like magnificent and shining blocks of ice that detach themselves from a continent and float off into an empty sea.

William Barrett – The Illusion of Technique

Here is one of Hölderlin’s poems – one which seems to me particularly fitting for the year in which we find ourselves:

All the fruit is ripe, plunged in fire, cooked,

And they have passed their test on earth, and one law is this:

The hills of heaven. And many things

Have to stay on the shoulders like a load

of failure. However the roads

Are bad. For the chained elements,

Laws of the earth. And a longing

For disintegration constantly comes. Many things however

Have to stay on the shoulders. Steadiness is essential.

Forwards, however, or backwards we will

Not look. Let us learn to live swaying

As in a rocking boat on the sea.”

Thanks for visiting my blog. I hope you are safe and content. 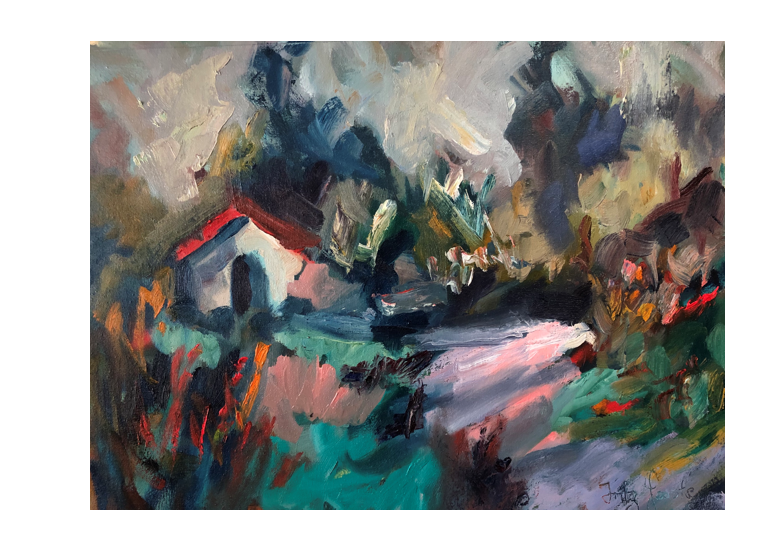 A garden path, late afternoon sunlight, late autumn. Pink highlights and cool shadows, memories of summer. I painted this over a rather somber grey abstract. I like the luscious streaks of oil paint, the abstractness of shapes and tones.

Perhaps there is a question in there somewhere, in those interactions between light and shadow. Everything points. In the face of this ephemeral life without guarantees, how to escape the shadow of anxiety? Rollo May wrote:

Anxiety is not an affect among other affects, such as pleasure or sadness. It is rather an ontological characteristic of man, rooted in his very existence as such.

May, Rollo. The Discovery of Being 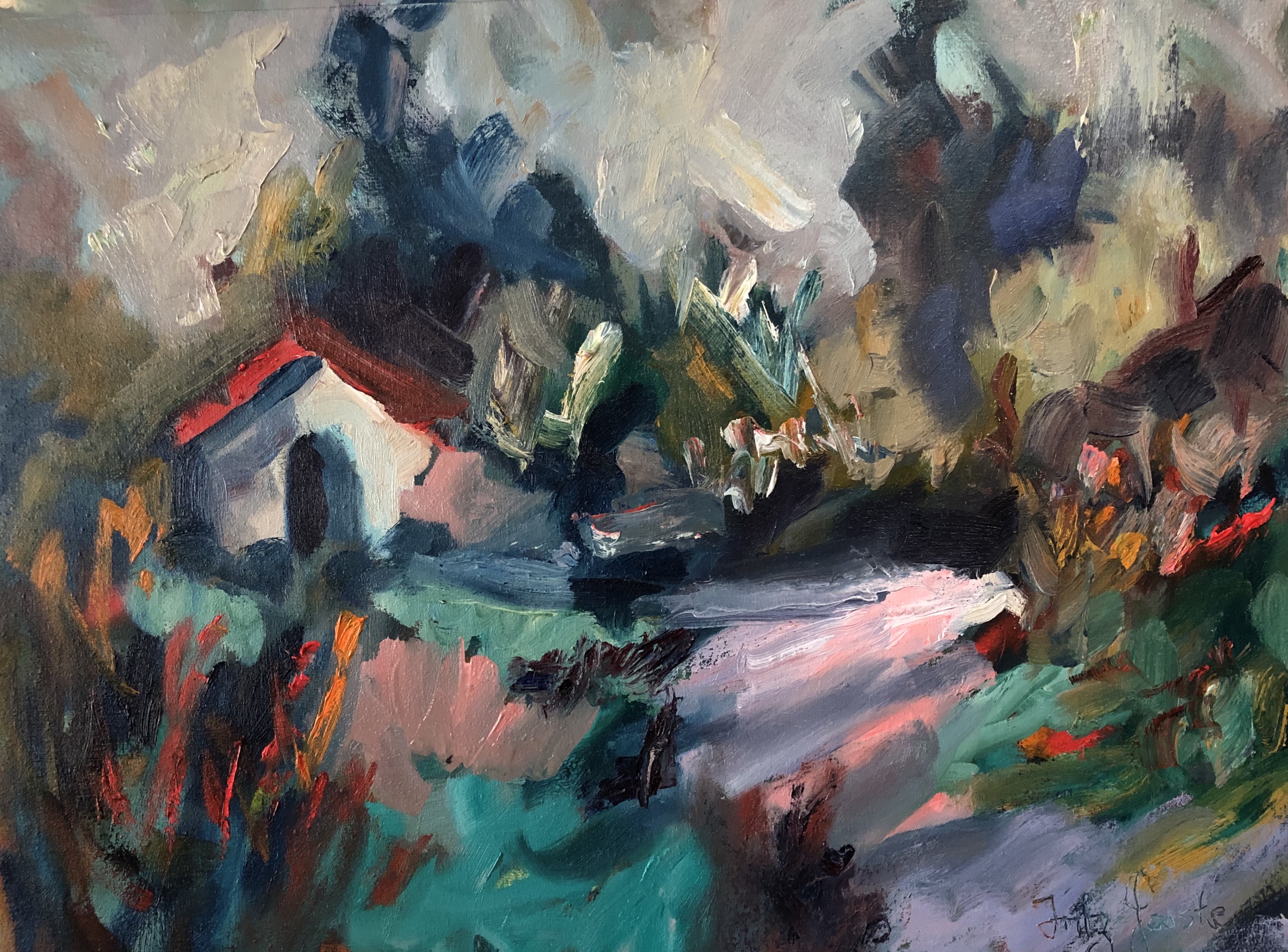 While painting this I thought of Ryokan and his hut in the forest, being overgrown by ivy year by year:

Thanks for stopping by my blog. I hope you are happy and content.

If you are interested to see more of my work, or to view or buy my work, please visit my gallery on Daily Paintworks.